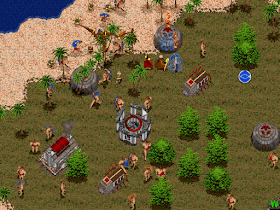 Genre: Strategy
Perspective: Diagonal-down
Visual: Free-roaming camera
Pacing: Real-time
Gameplay: Real-time strategy
Interface: Point and select
Setting: Prehistoric
Published by: CDV Software GmbH
Developed by: Tranquil Revolt in Computer
Released: 1997
Platform: DOS
The genius of this seemingly primitive RTS, I never cease to be amazed even now. What is always missing in RTS? Of course, the variety of units. Wanted variety? You got it!
In 1997, it was hard to stay in the RTS market, because then we had a lot of hit projects (from Dark Reign and KKND to Pax Imperia and Total Annihilation). But for Jurassic War, there was still a place on the pedestal thanks to its prehistoric surroundings and nice graphics.
Everything happens in some century before some Era (like ours), when one of your chosen clans arrives on Jurassic Island in search of a place to live (something bad happened on the mainland, and I had to sail away from there). But, as it turned out, you are not alone on the island - other clans live nearby, who also settled on the island. In general, then you already understand what will happen.
There are eight sides in the game, otherwise referred to as clans. The blue clan owns the art of healing, and can also create some eared elves (in general, my favorite unit in the game), which have the ability to teleport. Green (Tyrannos) tames the most powerful dinosaurs. Yellow (Koaki) tames the fastest dinosaurs and is the only clan that can raise flying pterodactyls. Violet (Masai) are skilled at working iron, so they have quite strong armored infantry. Orange - the coolest attacking mages in the game.
There is only one resource in the game - food. This resource is not only used to buy units and build buildings. It is also necessary so that all your people do not starve to death. This resource is obtained either by hunting mammoths and other animals, which with enviable constancy appear from somewhere behind the bushes, or by raids on enemy storages.
The developers also shoved a simple RPG system here. Each unit in the game has characteristics (strength, defense, HP, movement speed, etc.) that develop in battle, and can also carry items (swords, shields, bows, food, water, magical artifacts and other useful utensils ), not to mention the fact that ordinary infantrymen can turn from skinny construction slaves into hefty jocks capable of single-handedly coping with a pair of tyrannosaurs.
‹
›
Home
View web version