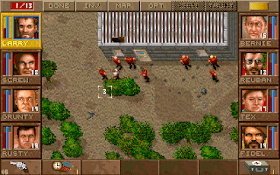 Genre: Role-playing (RPG), Strategy
Visual: Isometric
Pacing: Turn-based
Published by: Sir-tech Software
Developed by: Sirtech Canada Ltd.
Released: 1996
Platform: DOS
Unlike the original version of the game, JA: DG lacks a clear storyline. Instead, you are offered to complete a series of contracts in different parts of the globe.
Each mission is complicated by the time frame - if you do not complete it in a strictly defined number of moves, then it will fail. The goals are very diverse: from the destruction of all opponents within the sector to the theft of important documents.
Due to the fact that events are no longer tied to a single island, new types of landscapes have appeared in the game. There are a few new faces in the ranks of the mercenaries, and a couple of new deadly games have been added to the arsenal, which are perfect for playing deadly games.
‹
›
Home
View web version