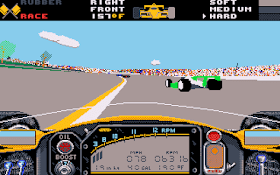 Genre: Racing / Driving, Simulation
Perspective: 1st-person
Vehicular: Automobile, Track racing, Vehicle simulator
Published by: Electronic Arts
Developed by: Papyrus Design Group
Released: 1989
Platform: DOS
It's worth starting with the fact that Indianapolis 500: The Simulation is the ancestor of the IndyCar computer racing series.
The first game to highlight the famous and highly popular Indy racing class. Moreover, this game is one of the first racing simulators to use a 3D graphics engine.
You, as in any proper simulator, are free to choose a team (March, Lola and Penske are offered to choose from). The choice of car also depends on the choice of the team: Cosworth, Buick and Chevrolet, respectively. When you decide on the choice of the team (and, accordingly, the car), you can try out the car in the Practice mode. This mode is a test drive designed to show you the behavior of the car on the track, its strengths and weaknesses. Having tested the car, you can make some technical manipulations with it: determine the stiffness of the suspension, adjust the axle spacing, set the required amount of fuel in the tank, and make some other settings. When this stage is over, you can safely move on to the Qualify mode. This mode is a qualifying round before the main race. Here your task is to show the best possible time in order to get a better starting position in the race itself. When the qualification is successfully completed, you can safely proceed to the main Race mode. Here you have to directly fight with opponents. Rivals are extremely evasive: it is not difficult for them to catch up and overtake your car, so you should carefully monitor the track, pass it along the most favorable trajectories and do not forget about the rear-view mirrors. Meanwhile, outsider racers who seem to be asking for an accident often cause trouble. With due diligence, you will learn how to manage with local aces already at 10-15 laps (the number of laps, and with it the difficulty level, can be set manually: from 10 to 200), after which you can move to a more difficult level with full confidence: more laps, the track is longer and it is possible to crash the car before reaching the finish line.
In general, Indianapolis 500: The Simulation leaves a pleasant impression even many years later. This game has everything that an amateur racer needs: sports cars and the ability to customize them to your liking, modern (at the time of release) graphics, good opponent AI and, of course, speed...
‹
›
Home
View web version