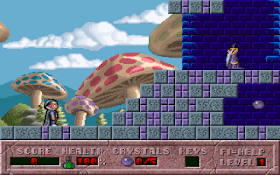 Genre: Action
Perspective: Side view
Visual: 2D scrolling
Gameplay: Platform
Setting: Fantasy
Published by: Apogee Software
Developed by: Moonlite Software
Released: 1994
Platform: DOS
The hero of the game is a novice magician, a kind of Harry Potter, trapped in a castle teeming with all sorts of dragons, bats, scorpions, wild mushrooms, dragonflies and other rubbish. Senior teacher Terexin, a kind of Gandalf, sends you to clear this dwelling, from time to time encouraging with optimistic phrases like: "Are you still alive?"
The game consists of four episodes with nine levels each. To complete the stage, you need to collect a certain number of crystals. At the end of each level, you have a chance to earn a couple of bonuses either for a fully collected Treasure, or when passing for a certain time. The last stages in the episodes, according to the laws of the genre, are crammed with bosses (mad monkeys, wooden demons...), touching which threatens the inevitable death of the boy...
The controls are simple: right-left-jump, in addition, you can shoot with arrows, slightly resembling the sign "Do not fit. Kill!", And you can shoot both forward and up. Graphics (given the year of release) pulls on five plus. Throughout the entire playthrough of the game (by me personally) I noticed one flaw in the gameplay ... not even a flaw, but a flaw ... if you are on the elevator platform (which is controlled by the up and down arrows) and you are trying to shoot a bat flying above you, then nothing will come of it - the elevator goes up, and you, accordingly, fall directly into the paws of the mouse!
Sound effects are similar to Prehistorik's. Plus, there is a good musical accompaniment. The game also features Puzzle elements such as switch combinations, tricky mazes, and crashing walls. With some inattention, you can fall into a trap. And most importantly - in this game there is no concept of life (no matter how many times you die, you start the level from the beginning) and you can save here!
In general - a great platform arcade game that has everything (and even a little more) that should be in a real arcade...
‹
›
Home
View web version