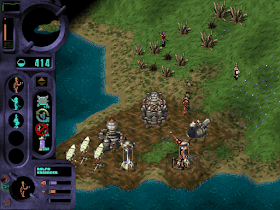 Genre: Strategy
Perspective: Diagonal-down
Visual: Isometric
Pacing: Real-time
Gameplay: Real-time strategy
Interface: Point and select
Setting: Sci-fi / futuristic
Published by: Electronic Arts
Developed by: Bullfrog Productions
Released: 1996
Platform: DOS
A long war between four different civilizations (among which earthlings somehow got in the way - all of them, you see, cannot sit on the sidelines) led to an ecological disaster in a single galaxy - thousands of species of plants and animals were destroyed. A little later, a certain superior race appeared in the galaxy - Ethereals, who had lived here for a long time, but subsequently left the dimension. It didn't take long for the natives to pacify the raging guests and force them to personally disentangle the mess they had made here. The race that showed the best result at the same time was promised to return the right to a normal existence ...
The concept of the game is somewhat unusual. Here you do not have to build military equipment and develop new deadly weapons, and the war here is not quite the one that fans of the strategic genre are used to. You have a very small team of highly specialized scientists who will have to examine the planets for the presence of flora and fauna to be studied and further reproduced. It would seem that the matter is simple, but here's the problem - on the planets you do not act alone - there are competitors who in every possible way prevent you from fulfilling the plan. And here the already mastered fauna will help you - tamed cattle can not only be used for economic purposes, but is also quite a serious fighting force. At the same time, you can not only reproduce different species, but also cross them, while getting "multifunctional" hybrids, with each animal doing something better than others, something worse. Some of them will be more useful at logging, some will be better suited for construction, and some - and to pacify the presumptuous adversary ...
On the other hand, even though fighting here, in general, is not forbidden, it’s still not worth getting carried away - Ethereals, who periodically visit, for the unsatisfactory performance of the main task (as well as for undisguised acts of vandalism over enemy buildings) can also hit on the ears. Although you can avoid this if you wish, so in the end you yourself choose how to achieve victory.
In the list of the most dynamic strategies, this game would certainly take one of the top lines. You need to think and act here very quickly and correctly - one wrong move, and your competitor has already outrun you in development, and even brought a herd of its living creatures to your base. Well, the more interesting it is to pass. Gene Wars is a really original and interesting game.
‹
›
Home
View web version