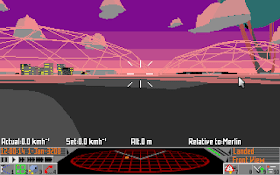 Genre: Action, Simulation
Perspective: 1st-person
Gameplay: Managerial / business simulation, Shooter
Vehicular: Space flight
Setting: Sci-fi / futuristic
Published by: GameTek
Developed by: Frontier Developments Ltd.
Released: 1993
Platform: DOS
Frontier: Elite 2 is a continuation of the Elite series of games. The second part was no exception, and again you have the same ship, some money and the whole Universe ahead. Trade, hunt criminals, work for the governments of various civilizations.
You have no restrictions on movement, the universe in the game Frontier has about 100,000,000,000 planets, so you will never see how big it is.
‹
›
Home
View web version