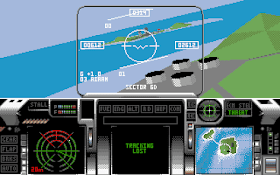 Genre: Simulation
Perspective: 1st-person
Vehicular: Flight / aviation, Vehicular combat
Setting: Contemporary
Published by: Ocean Software Ltd.
Developed by: Digital Image Design Ltd.
Released: 1990
Platform: DOS
"Sit at the helm of the latest F-22 or experimental F-29, complete missions in the Middle East, the Pacific Ocean and Europe, gain air superiority, destroy enemy ground and sea forces, show all that our latest fighters are capable of!"
The game gives you the opportunity to "steer" the latest F-22 (which was in development at the time) and the mythical F-29 (in the original experimental X-29), participate in the struggle for oil in the Pacific Ocean, help "one friendly Middle Eastern country that is at war with two other countries" (with the capital in the city of Tel Aviv), as well as restore peace and justice, when one very large country started a war against many others in Europe (since the game is American, and even 90th year, then relevant plot).
You will have to complete missions to gain air superiority, break through air defenses, support ground units, intercept and destroy military convoys, trains and strategic facilities (military factories, airports and bridges). Choose from a large arsenal of missile weapons to destroy air and ground targets. Despite the overall simplicity of the flight model, some little things have been taken into account that you will definitely need to keep in mind: for example, flying a supersonic aircraft with the landing gear down will not work, it will be completely torn off!
In addition, you will have to learn how to land normally, and this will happen only after several dozen accidents and crashes on the runway. But after that you will be able to fully enjoy the game, feel the tremendous speed, rushing tens of meters above the ground, play hide and seek with enemy air defenses, fight for your life with a couple of MiG-29s and Su-27s behind your back (which, oh, how not easy to shake off the tail!) and return to base with a jammed landing gear and fuel for only one run ...
‹
›
Home
View web version