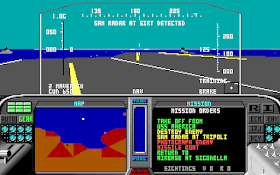 Genre: Simulation
Perspective: 1st-person
Vehicular: Flight / aviation, Vehicular combat
Setting: Contemporary
Published by: MicroProse Software
Developed by: MicroProse Software
Released: 1988
Platform: DOS
The latest flight simulator made by Sid Meier. We are given the opportunity to fly the F-19 - the American "stealth" aircraft. What is interesting: the aircraft was still a secret weapon during the development of the game, it was declassified a little later after its release, so the appearance of the aircraft is not completely similar to "stealth". Stealth Fighter has quite progressive graphics for its time: your F-19, enemy planes, and other objects in the game are all done in 3D graphics; I note that the game was also released on 8-bit platforms. Tasks are randomly generated, that is, missions are not repeated. To sum up: a worthy choice for fans of flight simulators.
‹
›
Home
View web version