Eye of the Beholder II (DOS) 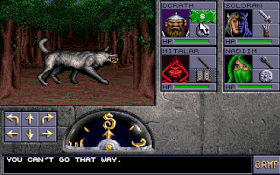 Genre: Role-playing (RPG)
Perspective: 1st-person
Pacing: Real-time
Interface: Point and select
Setting: Fantasy
Published by: Strategic Simulations
Developed by: Westwood Associates
Released: 1991
Platform: DOS
Eye of the Beholder 2 is the second and best part of the trilogy. This is one of those amazing creations whose name is a masterpiece. From the first part, its best features were taken, everything insignificant and fussy was discarded, a pinch of magical ingredients was added to the resulting essence in the form of witty and elegant riddles, unexpected plot twists, expressive monsters, original caches - and from all this something perfect and unique was born.
This game can not be called pleasant in passing. She is extremely complex. Too difficult fights, tricky riddles, labyrinths, well-hidden caches - you need to constantly jump above your head to get through it. Managing four characters in real time is also not very easy. Still complicated by the lack of a map. In general, this is a game for those who prefer the joy of a difficult victory to the convenience of the interface and branched dialogues.
The optimal party is two combat characters in front and a magician with a cleric behind their reliable backs. The choice of multi-class characters can be fatal, as the game is really difficult. It is better for warriors to give a short sword instead of a shield in the second hand, then when using the Haste spell, they turn into a real combat thresher.
When drawing up a party, a serious question arises whether to take a thief. Unlike the other two parts of the trilogy, EOB2 really needs a thief. Only he will be able to open several doors to the cells of the monks on the second floor of the temple, a door in the side compartment of the first dungeon and notice a secret cellar in the forest. But he doesn't need anything else. If you really want to include a thief in the party, then it makes sense to combine it with a magician - such a character will not lag too far behind others in development. But you can do otherwise: take the NPC thief Insal to the party and force him to quickly open all the locked doors. Keep in mind that at the very first halt, this little swindler will run away, taking with him some of the valuable weapons as a keepsake, if you do not first put them on the floor from the inventory. And the said basement can be found by simply poking through the bushes in the southern part of the forest.
From the forest in front of the Temple of the Darkmoon to the lair of Dren, the main boss, lies a long and exciting journey through deep dungeons and high towers. Characters who died heroically on this difficult path can be revived on the altar of resurrection or with the help of magical means. However, I do not advise you to do this, since when they are resurrected, their characteristics slightly decrease. It's better to load an old save.
There are some ways to make your life easier, like importing a developed batch with good weapons from the first EOB. In many cases, when things get very tight in combat, you can run to a safe place, rest and recover there, and then return and avenge everything. The main thing is to run away in time and remember well the way to a safe place; if you accidentally take a wrong turn, you run the risk of getting into a dead end, as monsters usually follow on your heels. The rule of thumb is to persist at every turn. You never know what surprises await around the next corner.
‹
›
Home
View web version