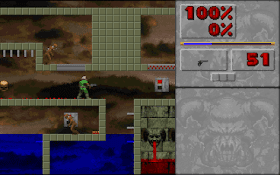 Genre: Action
Perspective: Side view
Visual: 2D scrolling
Gameplay: Platform, Shooter
Setting: Sci-fi / futuristic
Published by: Prikol Software
Developed by: Prikol Software
Released: 1996
Platform: DOS
At the end of the great twentieth century, id Software, already known for Commander Keen and Wolfenstein 3D, released a game that was destined to become a legend. Her name is Doom. Its success was so colossal that the studio immediately began working on a sequel, which they released about a year later - Doom II: Hell on Earth. It immediately provoked an explosion in the fan community. This is understandable - in Doom II, for example, for the first time support for connecting your own levels was implemented, and then fans even learned how to make their own mods, albeit very primitive ones. It is worth noting that this was by no means encouraged by the developers themselves.
However, the era of Doom began to gradually pass. Duke Nukem 3D appeared, which marked the beginning of the rapid development of the gaming industry and showed the whole world new opportunities (like fairly close interaction with the world) and unprecedented graphic and technical improvements at that time. And with its release, it became clear that Doom was living out its time. However, his fans still remain. And three of them - Alexey Volynskov, Vladimir Kalinin and Evgeny Kovtunov - wrote a small 2D game similar to the notorious Dangerous Dave, but with a bias towards Doom. It was called Doom 2D.
The success of the game exceeded all expectations. The game, written by schoolchildren (!), albeit high school students, became so beloved and famous that when it went abroad, many of its modifications were created there. Also, Russian fans have repeatedly developed its remakes. The most famous of them, which continues to develop to this day, is Doom 2D: Forever.
The essence of the game is simple - we go through the levels, shoot monsters, look for first-aid kits and equipment and try not to fall into traps. In appearance, the game may seem boring, but if you sit down to play, it can drag out for a long time, I warn you right away. From its three-dimensional prototype, Doom 2D inherited all the weapons, items and monsters, plus new ones appeared, like an evil piranha or a super machine gun. Levels can start either calmly or in front of some cyberdemon, besides, they are very confusing and do not suffer from a lack of evil monsters and cunning traps that can spoil your mood at any moment. But there are not enough weapons and first-aid kits, so the principle of "go aimlessly and kill" is not relevant here, so you will have to constantly think over tactics in accordance with the number of monsters and cartridges. Well, if you managed to go through the campaign and kill the final boss, then in Doom 2D there is still an opportunity to play together on one computer through split screen. Two modes are available - Cooperative and Deathmatch.
Fans have long awarded the game the proud title of "classic of two-dimensional platformers." Therefore, if you like old 2D arcade games, if the word "platformer" is not an empty phrase for you, then this game is definitely your choice! 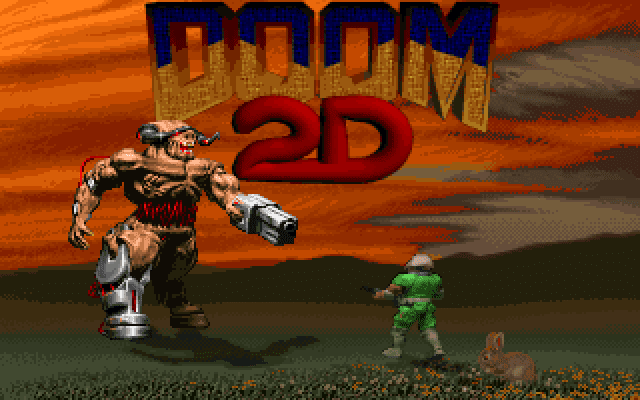