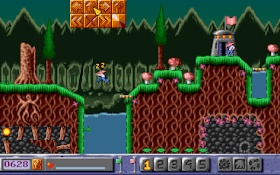 Genre: Puzzle
Perspective: Side view
Visual: 2D scrolling
Interface: Point and select
Setting: Fantasy
Published by: Millennium Interactive Ltd.
Developed by: Millennium Interactive Ltd.
Released: 1994
Platform: DOS
The earth holds many treasures. Here they are, just take a shovel and dig a path to them! Your labors will be returned a hundredfold in the form of a huge chest with gold and gems! This is exactly what the inhabitants of one magical country decided. And although treasure hunting is a severe test, which not everyone can master, they firmly decided to go through this difficult path to the end. Let's help them?
The player is given the opportunity to choose one of four races. And this choice should be taken as seriously as possible - all races have significant differences.
The goal of each level is to collect a certain amount of money. This goal is achieved, as the name clearly implies, with a shovel and diligence. Remember, it’s not enough to find a gem - you need to pick it up! And if you don't raise it, others will take it away... There are enough conflicts in the game. As soon as two opposing diggers meet, a fight will immediately begin, and until someone dissolves under powerful blows or shamefully runs away.
I recommend to look into the local shop more often, where they will sell you a lot of useful (and not so) things. And if in the first half of the game you will hardly shop there often, then in the second half you can’t do without a store.
The significant disadvantages of Diggers, I would include not the most convenient interface and the lack of tips. Most of the icons are clear, but the purpose of some of them will have to learn through trial and error. It is also worth remembering that the gems themselves are just stones. And they will remain just stones until you exchange them for cash at a local pawnshop. That's just bad luck - local pawnshops do not take everything in a row, but only 3 specific types of stones! Often you have to wait quite a long time until, say, gold becomes fashionable. But the place in the pockets is not rubber ...
In general, the game turned out to be very specific, but very addictive! I recommend spending your time on it and going through at least 5 levels. And there, you see, you won’t be able to tear yourself away from the game!
‹
›
Home
View web version