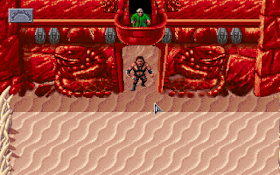 Genre: Role-playing (RPG)
Perspective: Diagonal-down
Pacing: Turn-based
Setting: Fantasy
Published by: Strategic Simulations
Developed by: Strategic Simulations
Released: 1993
Platform: DOS
The Dark Sun world is a planet scorched by magic and turned into a desert. A planet where tyrannical rulers stage brutal gladiator fights. A planet that is so unlike the world of Forgotten Realms familiar to all AD&D fans. But it also has its own hidden charm.
This world has its own unique races, and even halflings familiar to many (halflings or hobbits) have become cannibals in it... In this world, in addition to the usual magicians, there are also psionics capable of performing actions beyond the power of thought even the most skilled magician.
In this world, four of your heroes will have to survive, who, at the behest of the tyrant, have become gladiators. But they already have an escape plan...
Despite its venerable age, this game boasts a rather large and well-developed world, a huge selection of weapons and spells, as well as a non-linear solution to many problems.
‹
›
Home
View web version