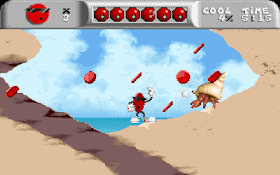 Genre: Action
Perspective: Side view
Visual: 2D scrolling
Gameplay: Arcade, Platform
Published by: Virgin Interactive Entertainment (Europe) Ltd.
Developed by: Virgin Games
Released: 1994
Platforms: DOS, SEGA Genesis / Mega Drive, Super Nintendo (SNES)
What were the mega-corporations doing in the early 1990s? The same as always - trying to take over the world. Sticky tentacles of advertising entangled the media space more and more tightly. Our favorites - video games - did not stand aside either.
It just so happened that the vast majority of games made under licenses and at the expense of manufacturers of hamburgers, soda and chips were, to put it mildly, disposable and were forgotten by the playing fraternity faster than they had time to go out. The more interesting our patient looks - the most striking exception to this sad rule.
The Cool Spot character was the symbol of the "7 Up" pop in the early nineties: the red pill with the arms and legs of Mickey Mouse and the grace of an MC Hammer, by the will of the designers, left the logo of the drink and went on a journey through the world of video games. Before us is the second and most successful part of his adventures.
Cool Spot is a teardrop-clean platformer. We collect red pills, jump on the islands, shoot soda bubbles at enemies; having collected the required number of pills, we release our twin brother, languishing in a cage; having typed a little more than the required minimum, we recover to the bonus level. Actually, everything. Or rather, everything related to the gameplay. And then the fun begins.
It just so happened that extraordinary people worked on Cool Spot. Too uncommon for tough businessmen to ruin another "grocery" game. The lead programmer for both the original Sega Genesis and the PC port was David Perry, the future dad of Worm Jim and MDK, an icon and messiah of the video game world. Thanks to his passages on the keyboard, Cool Spot boasted excellent smooth animation and excellent performance. The second famous person who had a hand in the game is Tommy Tallarico, a composer and just a great talent. The music in the game is good: witty, addictive and gives what is happening on the screen a taste of Zen Buddhist peace mixed with the invigorating energy of summer.
The game is definitely cool. And at the same time, it brings coolness to the brain, inflamed after a stormy day: fascinating and uncomplicated gameplay, framed by excellent graphics and music (and those amazing smacks heard when you take another pill!), plunges you into the world of summer, children's happiness. And this, damn it, is wonderful when the brainchild exceeds the aspirations of its parents and becomes, if not a revolution, but a standard. There will be revolutions, but such games are needed in peacetime.
‹
›
Home
View web version