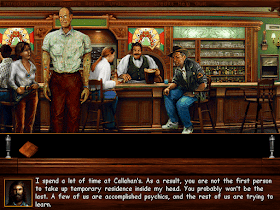 Genre: Adventure
Perspective: 1st-person
Gameplay: Puzzle elements
Setting: Sci-fi / futuristic
Published by: Take-Two Interactive Software
Developed by: Legend Entertainment Company
Released: 1997
Platform: DOS
One of the best (if not the BEST) point-and-click quests from Legend based on the book of the same name.
There is a bar in New Jersey where the paths of the most diverse times and worlds intersect. On one starry night, when the Interplanetary Leadership decides to demolish the reality that contains our Earth for failing to generate the slightest bit of a creative idea, this bar enters a country musician who has seen a lot, in whose head we have to jump through five different eras in order to prove to the Higher Beings that our world is the best of their creations...
The game is non-linear - or rather, not quite linear. Each world has its own set of locations and plot, and their stories do not overlap with each other - so we are free to play them in any order, they are completely self-sufficient. Interspersed are their walks in and around Mike Callahan's Saloon, in which the most incredible characters meet all the time. So where are you heading to start? To fight for the preservation of testosterone in human bodies or to revive the type of chocolate lost to civilization? You decide.
‹
›
Home
View web version