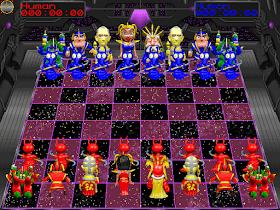 Genre: Strategy
Gameplay: Board game, Chess
Setting: Sci-fi / futuristic
Published by: Interplay Productions
Developed by: Interplay Productions
Released: 1992
Platform: DOS
Here is a rather interesting version of chess. If earlier such a concept as "eating" a piece was very conditional, then in Battle Chess you have the opportunity to see the fights between pieces on a three-dimensional board with your own eyes. The spectacle, I must say, is quite amusing. And there are plenty of fights themselves - for each pair of figures there is a different version. The figures themselves are decorated rather unusually. Forget about their classic appearance, you will not see any ships, horses and elephants here - the new time (presumably 4000) requires sophisticated transformer robots and soldiers with laser pistols. Although, of course, this does not affect the rules of the game in any way - chess is chess. However, you can always switch to your usual classic figures and a two-dimensional board.
You can play, of course, as one against the computer (there are several levels of AI), and together. Among other things, the game involves a learning mode, the ability to arrange the pieces yourself (for example, to solve chess problems), the calculation of the most appropriate (from the point of view of a computer, of course) moves, and so on.
‹
›
Home
View web version