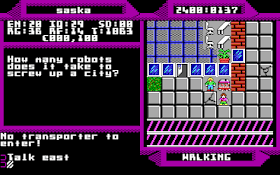 Genre: Role-playing (RPG)
Perspective: Top-down
Pacing: Real-time
Setting: Post-apocalyptic, Sci-fi / futuristic
Published by: ORIGIN Systems
Developed by: ORIGIN Systems
Released: 1988
Platform: DOS
The game takes place in 2400 AD. (as the name implies) in the city with the euphonious name Metropolis, built more than 100 years ago by settlers from Earth on the distant planet XK-120 (or New Athens, as the colonists called it). Since its founding, Metropolis has prospered under the strict guidance of a friendly alien race called the Tzorg. It seemed that there would be no end to prosperity, and friendship between people and aliens would last forever.
Unexpectedly, in 2291, the Tzorgs recalled their ambassador from Metropolis while simultaneously attacking the outer planets. After an unsuccessful attempt to hold a summit to resolve the conflict, the Interstellar Alliance declared war on the Tzorg Empire, and soon New Athens fell to endless attacks by alien forces. The metropolis was put under martial law, and soon the Tzorg continued their expansion against humanity, leaving New Athens under the watchful eye of powerful squads of robotic police.
By all the laws of the genre, an underground movement immediately formed in the back streets of Metropolis, designed to crack down on mechanical troops and thereby free the planet from the oppression of the hated aliens. The members of the movement managed to achieve some success in creating an information network and a supply system, but soon most of the rebels were arrested. Those who escaped arrest were forced to lay low due to increased pressure from the police. However, before falling into hibernation, the movement managed to take two decisive steps that could give humanity the opportunity to breathe deeply again: dig a tunnel leading to the Tzorg government complex, and find a person educated and courageous enough to take advantage of this tunnel and deactivate the police. In addition, access to the alien government center would be a great help in a military conflict unfolding in the vastness of the universe.
From this moment on, the further development of events falls entirely on your shoulders. You play the role of a computer specialist who arrived on the planet as part of the latest batch of labor recruited by the Tzorg on the planets they occupied. Your advantage is the absence of police records in your personal file, which allows you to freely move around the city, collecting valuable information and items necessary for the successful completion of the mission. You must find a way to infiltrate the Tzorg government complex, get to the main control panel, and put an end to the Tzorg's ironclad rule. The fate of New Athens and all mankind is now in your hands.
‹
›
Home
View web version