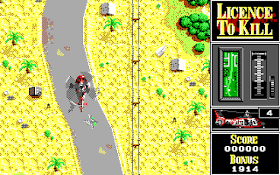 Genre: Action, Racing / Driving
Perspective: Top-down
Gameplay: Arcade, Shooter
Vehicular: Helicopter, Naval / watercraft
Narrative: Spy / espionage
Published by: Domark Limited
Developed by: Quixel
Released: 1989
Platform: DOS
An old arcade game about a very unloved British superspy James Bond, who does not like communism, prefers expensive alcohol and luxurious women, who always succeeds, based on the film of the same name. The plot of the game, perhaps, will be able to appreciate those who watched the movie. I only managed to understand that we, in the role of Bond, are hunting for the drug lord Sanchez, who killed Bond's bride.
By genre, this is a vertical "scroll shooter". The meaning of the game is to complete missions by crossing the area and clearing it of all kinds of enemies (servants of the drug lord). Despite the general uniformity, outwardly the missions are quite diverse: for example, we will not only run on foot, but also drive different vehicles - for example, a car, an airplane. And, of course, as in any arcade, there is a collection of bonuses, and quite standard ones (ammunition, ammunition).
Graphically, the game looks decent for a 1989 release, enemy figures and environmental details are quite clear.
And if you forget about who we play for, then you can get some pleasure from this dynamic fun arcade game. Well, if there are fans of the British superspy - they generally have to watch.
‹
›
Home
View web version