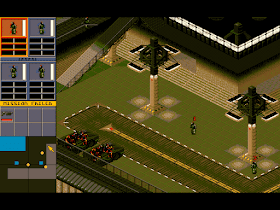 Genre: Action, Strategy, Compilation
Perspective: Diagonal-down
Visual: Isometric
Pacing: Real-time
Setting: Cyberpunk / dark sci-fi, Oceania
Published by: Bullfrog Productions
Developed by: Bullfrog Productions
Released: 1994
Platform: DOS
A special edition that includes the original Syndicate and its American Revolt add-on. It also differs from other editions by the presence of special support for later versions of Sound Blaster.
So American Revolt picks up where the original Syndicate left off - our Syndicate rules the world. Beautiful, yes. But here trouble begins - radical elements in different countries of both Americas rather quickly overthrow our government and establish their own anarchist power ... And this cannot be allowed.
The game starts like this - on the map, Eurasia, Australia and Africa are painted over with our even color, and only the Americas are a random accumulation of foreign flags. We are expecting 21 new levels - and the initial one is the damned Atlantic Accelerator, which killed so many souls of the unfortunate players of the original version. All maps are redrawn, but the style is about the same, so you can rely on previous experience as a support.
The second innovation is a new weapon - a beacon for ordering a bombardment, much more tactically useful than an agent's self-destruction, and a camouflage field that makes our agents look like ordinary passers-by.
And then ... Multiplayer up to 8 players + 10 maps created specifically for online play. And the new AI, designed to show the fact that our new enemies KNOW that we will try to take their lands - the difficulty of the game has about doubled, and not because of the size of the opposition.
A stylish continuation of an equally stylish legend. For those who did not have enough of the original, and Syndicate Wars already seem to be something wrong.
‹
›
Home
View web version