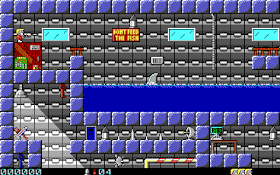 Genre: Action, Puzzle
Perspective: Side view
Visual: 2D scrolling
Gameplay: Platform, Shooter
Interface: Direct control
Narrative: Spy / espionage
Published by: Apogee Software
Developed by: Apogee Software
Released: 1992
Platform: DOS
Another platform game of the "golden age", which has the unconditional status of a classic of the genre. Your hero is superspy number 006, the only person in the world who can return the blueprints of the destructive Red Rock Rover weapon, stolen by the terrorist organization D.V.S., dug in on an impregnable island. And even if outwardly he does not look very much like a special services officer - fashionably combed blond hair, red pajamas (!) Instead of camouflage - but still, only he can save the world ...
The game consists of sixteen levels for successive completion (fifteen on the island and the last one in the bandit fortress on it); side view, of course. To successfully complete the level, you need to find a radar and a stick of dynamite (with which you can "open" the passage to the next level). There are many enemies in the game, among which there are both people and dogs, as well as robots and tanks; there are also a variety of traps, including spikes coming out of the ground, spears shooting out of walls, pools of acid and sharks, mines, fans, and so on. The most terrible trap is the deadly laser beams, which will have to be turned off, looking for deactivation diskettes for the computer terminals that control them.
The hero has three “life points” (that’s how much he can withstand blows, although in a number of situations death occurs instantly [however, for some reason, the spikes in the floor, unlike other dangers, kill more than with one blow]) and an unlimited number of "lives" as such. His only weapon is a finite ammo rifle (ammo for it must be collected separately, initially there are only five sets), with which you can kill most of the enemies, but still not all, because some are either invulnerable to it at all, or require to kill a very large number of shots, so killing them is not always advisable.
There are a lot of bonuses in the game (except plot important radars): letters from which you can make the word "SPY" and get a huge amount of points, radios, briefcases and wads of money collected only to increase the score, as well as much more useful and interesting things that temporarily give certain opportunities to our hero. The latter include accelerating boots, barrels that allow you to climb somewhere if you stand on them (it is important not to push them into a hole), some things that create additional platforms that will allow you to get to areas of the level that are normally inaccessible, an amplifier for a rifle, with which you can kill any enemy with one shot; however, in this game, unlike Crystal Caves, there are also purely negative bonuses: for example, there is a thing that slows down the hero, and a bonus in the form of a question mark momentarily changes the direction of his movement.
The game is distinguished by quite nice and bright graphics, interesting design of really diverse levels, which even have objects such as pool tables with cues, not to mention just the filling of levels with various objects (which makes the game world seem almost alive) and funny animation death of a hero. But there is no need to describe all this anymore - simply because this wonderful game is really a real classic that hardly needs any additional recommendations for everyone who appreciates great old platformers.
‹
›
Home
View web version