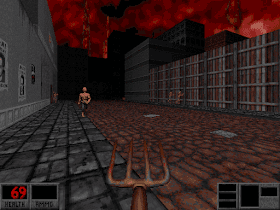 Genre: Action, FPS, Compilation
Perspective: 1st-person
Pacing: Real-time
Gameplay: Shooter
Interface: Direct control
Setting: Fantasy
Narrative: Horror
Published by: GT Interactive Software Corp.
Developed by: Monolith Productions
Released: 1998
Platform: DOS
Here is a complete collection of the adventures of a cowboy, an exorcist, a living dead, a heartthrob and just a bad guy Caleb on the "engine" Build. The edition with a very original name includes both the original version of Blood and its additions Cryptic Passage and Plasma Pak.
In the original game, you have to rise from the grave and, over five episodes of 10 levels each, prick ghouls and cultists with pitchforks, blow up rats with tons of TNT bombs, run away from strangler hands, tear gargoyles to pieces, and, of course, take revenge on huge monsters - bosses for the death of their friends and beloved Ophelia.
In Plasma Pak, Caleb learns that the cultists from the original game are going back to the old ways and summoning a new monster, the Beast, who is ready to eat the protagonist for breakfast, lunch and, if he stays, dinner without any hesitation, but we know who will end up feast, right?
And in the add-on Cryptic Passage developed by a third-party studio, some other angry god comes to the aid of the enemies of our hero and steals a mysterious sacred scroll, which, in indecent hands, can destroy the whole world and the Universe to boot. Caleb, of course, does not sleep and goes to overthrow God from his throne.
Games of the Blood series should be in the lists of completed games, I'm not afraid of these words, of every self-respecting gamer, and if you missed them, then here's your chance to get acquainted with a valuable artifact of the gaming industry.
‹
›
Home
View web version