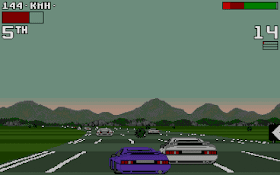 Genre: Racing / Driving
Perspective: Behind view
Gameplay: Arcade
Vehicular: Automobile, Street racing
Published by: Gremlin Graphics Software Limited
Developed by: Magnetic Fields (Software Design) Ltd.
Released: 1993
Platform: DOS
Racing cars brand Lotus. Specifically, on "Esprit S4", "Elan SE" and "M200". The cars differ from each other in parameters, but you most likely will not notice a real difference, except that only the Esprit is still faster than all the others. On the track, which runs through one of 13 landscapes, it is proposed to overtake 20 cars and pass the specified number of checkpoints. In this case, various objects on the track will interfere: puddles, stones, and so on. You can’t kill them, but it’s very possible to fly off the track. However, not all obstacles are so harmful - you will only jump on some. Particularly unpleasant is the stage on the road being repaired and in the mountains. But that's not all: your car has finite fuel. To refuel (and this must be done on long routes), you need to stop at the gas station after the next check-point, marked with the appropriate signs, and stand there until the fuel indicator rises to a value that suits you.
The game, like most races of that time, does not suffer from realistic physics or controls, but it allows you to get a lot of fun, especially when playing together (in Split Screen mode), due to the variety of tracks and another great feature of this game: generating a random track based on the specified you in a special parameter constructor.
There are 10 different "radio stations" to choose from. You can play in the mode of a single race, or a championship (with a set of tracks specified by you using alphanumeric codes).
Also on the "futuristic" tracks there is a Turbo Zone, which noticeably increases the speed of your car, and a flashing white bar that slows down whoever crashes into it when it is turned on.
‹
›
Home
View web version