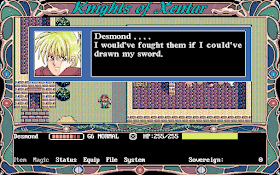 Genre: Role-playing (RPG)
Perspective: Top-down
Art: Anime / Manga
Pacing: Real-time
Setting: Fantasy
Narrative: Adult
Published by: MegaTech Software
Developed by: Elf Co.
Released: 1994
Platform: DOS
The legendary semi-pornographic jRPG from the future authors of the equally famous PowerDolls.
After rewinding two terms (in the previous parts of Dragon Knight) of the heroic action in the country of Strawberry Fields, the hero of the game named Desmond sets off to seek adventure in other places. And in the very first town on the road, bandits lie in wait for him and take off all the accumulated miracle clothes. Doesn't look like a normal jRPG, does it? And then it will be worse - when the completely naked Desmond will be ridiculed by the whole village, while he will look for offenders, and when he will pile on them with his bare hands at the very "do not indulge". And from this place his further misadventures begin...
The whole charm of the game is in a frivolous attitude towards oneself, up to the violation of the "fourth wall" rule, when the characters speak directly to the player sitting in front of the computer. Well, in an extremely obscene content. Along the way, all the standard cliches of the genre are ridiculed, about muscular jocks and seductive nuns, about beautiful goddesses and terrible villains (which certainly turn out to be someone's childhood friends). In general, continuous banter.
From the technological side, the game is another Japanese miracle - a standard 64-color palette for them with faded colors, but equipped with a choice between 2D and pseudo-3D mode (via Mode7 - for those who understand), beautiful AdLib music and in general . The combat mode here is turn-based, with a standard transition to the combat engine from the pleasure engine - in this series of games it is styled in the manner of old Final Fantasy.
In general, a paradoxical thing - jRPG, mocking the foundations of jRPG, but at the same time very high quality, both in terms of the quality of ridicule, and in terms of jRPG. Erotica and (sometimes hard) porn look here only as an addition to an already overflowing plate with a combined hodgepodge - but this plate does not flow over the edge. And this is good.
‹
›
Home
View web version