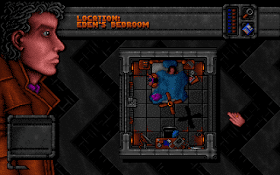 Genre: Adventure
Perspective: Top-down
Gameplay: Puzzle elements
Setting: Cyberpunk / dark sci-fi
Narrative: Adult
Published by: Empire Interactive Entertainment
Developed by: Creative Reality
Released: 1994
Platform: DOS
Dreams are considered an attempt by the brain to rethink the experience gained during the day. During these eight hours of sleep at night, the subconscious gets some kind of connection with the dormant consciousness, and tries to convey to it in an allegorical form some information that is important for a career, maintaining health, or life. Some people believe that dreams are mystical in nature, and a knowledgeable person can interpret them by finding prophetic signs of what will happen in the future.
The hero of the 1994 game “DreamWeb”, a bartender who lives and works in the city of the future, apparently located on the territory of modern Great Britain, has recently been seeing very realistic dreams. In them, he learns that there is a small group of people interested in making every effort and overthrowing human civilization into a semi-savage state in which it was many centuries ago. With one of these dreams, dreaming Ryan, the game begins.
He, or rather, the player, will have to destroy about a dozen of the main villains who are hatching diabolical plans for reprisals against humanity. Events will take place in different places, and the methods of destruction are chosen in a variety of ways. Each episode is worked out so that there are no "holes in the plot", and every thing can be explained in terms of logic.
Of the minuses that the developers recognized was the restriction on interaction with many of the objects around, which are idle parts of the interior, without the possibility of influencing them. But it happens in most other games as well. Another thing is that the design itself was created in the spirit of cyberpunk, and travel to the world of dreams, or perhaps to some kind of virtual reality, takes place according to the classic canons of the genre.
The game contains violent scenes, in particular scenes of violence against people, so it comes with some restrictions on the allowable age of players.
‹
›
Home
View web version