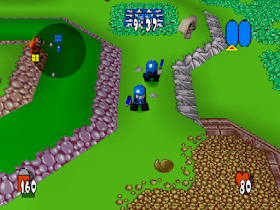 Genre: Action
Perspective: 3rd-person
Visual: Isometric
Gameplay: Arcade, Fighting, Puzzle elements, Shooter
Published by: Midway Home Entertainment
Developed by: Psygnosis Camden Studio
Released: 2000
Platform: PlayStation (PSX, PS1)
The game is to some extent a mix of Worms and a typical RTS.
The goal of the game is clear - to exterminate the enemies, or destroy their base. The main gameplay feature: characters can collect special square blocks (boxes) and stack them on a special platform with a capacity of 2x2x2. And, depending on the shape and size of the collected boxes, you can knock out weapons and units needed for battle from them. For example, if you put one box, then you can knock out some simple weapon from it. If you put another box next to it, it will be more powerful. And if you put two boxes on top of each other, you get a unit (in total, up to 4 units in a team). Well, if you fill the platform completely, we will get a unique combat vehicle (tank, combat aircraft, etc.). Each option also has its own improved version, which can be obtained using a special block (Bazooka -> Quadruple Rocket Launcher) . Weapons and units depend on the world you are fighting in. There are 8 worlds in total in the game. That is, in the ordinary world, the starting weapon is an uzi, in the desert, a fire pistol, and so on.
Also a distinctive and very positive feature of the game is humor (black, because the game is about murder). Starting from the plot and ending with various types of weapons and crazy missions to save the camel from the witch.
The game contains many game modes. Among them are well-known Deathmatch, Domination and Capture.
Multiplayer is supported in split-screen up to 4 people.
It was released in a limited edition, so it is undeservedly unknown and underestimated by many game.
‹
›
Home
View web version