Quest for Glory I (DOS) 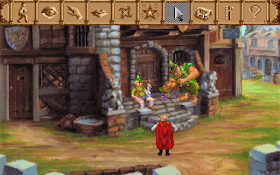 Genre: Adventure, Role-playing (RPG)
Perspective: 3rd-person
Pacing: Real-time
Setting: Fantasy
Published by: Sierra On-Line
Developed by: Sierra On-Line
Released: 1992
Platform: DOS
VGA version of the classic adventure RPG. It differs from the original in the combat engine from the third series, a radical reworking of music and graphics - the Hero is brought into line with subsequent series - and the introduction of the classic mouse interface from Sierra. In all other respects, it is fully consistent with the original.

The game Quest For Glory actually consists of three games. This is due to the fact that the player at the beginning of the game chooses a character class - Thief, Fighter or Mage. Each class has a specific way of solving problems - a fighter solves problems with force, a thief uses stealth and cunning, and a Mage relies on spell power. As a result, the game can be completed three times, each time solving the tasks in a different way.
The role-playing component also adds variety to the gameplay - the ability to improve the characteristics of the hero over time. This makes it possible to solve problems in various ways, depending on the pumped skills.
The game is distinguished by a large share of realism - the day is replaced by night not at moments clearly defined by the plot, but as the player wanders around the world, while some events can only occur at certain times.
The hero eventually gets tired, and sleep becomes a necessity.
Skills increase when using the corresponding abilities - for example, the more the player fights, fencing, or simply cleans the baron's stables, the higher the strength skill becomes. It's the same with magic - the more often he uses spells, the higher his intellect. This game concept forced the player to perform the same operations many times in order to increase the desired skill - for example, throwing a stone many times or climbing trees.
In battle, you can use various strikes and tricks or just run away. The fight takes place in real time.
The gameplay of the original game differed significantly from the 1992 remake. The original was built on the SCI1 engine and used a text parser, while the updated version, built on the SCI1.1 engine, used the point-and-click mechanism. Dialogues acquired a tree structure, that is, the dialogue was presented in the form of a menu with topics for questions to NPCs and a window for their answer - each question led a conversation along a certain line.
Initially, four races were planned - a dwarf, an elf, a man and a centaur. The races were later replaced by three human classes. The Goblin Labyrinth never made it into the game. Also, the player was supposed to be able to go inside a much larger number of buildings.
‹
›
Home
View web version