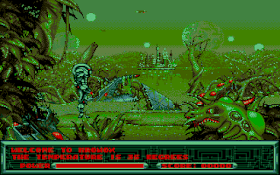 Genre: Action
Gameplay: Platform
Setting: Sci-fi / futuristic
Published by: Silmarils
Developed by: Silmarils
Released: 1991
Platform: DOS
You find yourself on a planet called Kronox. The place is clearly not a pleasant one: a swamp in which metal structures are mired, overgrown with mold and rust. A scrap yard that is slowly being swallowed up by a swamp. In the distance, beyond the swamp, we see a city, life is going on in it: ships either land or take off, lights flicker. However, here, in the landfill, there is also life. An annoying fly flying past you gets into the teeth of a green monster, which looks at you with interest. And, indeed, there is something to see.
Under your control is the Metal Mutant - a powerful means of destruction. You have been sent to the planet Kronox to free it from the tyranny of the dictator AROD 7. So what are the means we are given to defeat the tyrant? Our mutant robot can transform into three forms: cyborg, dinos and tank.
Cyborg is a humanoid robot. He knows how to jump, let the rope (let's imagine that you got into a swamp and started to sink, an iron structure hangs above you, but you can’t get it with your hands. The rope will help us - we let it go, cling to the reinforcement and pull ourselves up). Of the weapons, he has an Ax and a trident, by the way, very dangerous things in capable hands. With it, you can contact computers, restore your lives.
Dinos is no less useful than a cyborg. When the enemy is picked up from below and gets confused at the feet, dinos can bite him with their mechanical jaws. There are a lot of small evil spirits in the swamp, so this helps a lot. The tail can fire. Equally useful - you will understand how nice it is when you find yourself among hordes of spiders. Well, you can shoot flames out of your mouth too. From behind, if desired, a cybernetic mosquito called Cyberstyx 007 can fly out and fly into the most inaccessible places.
Tank - equipped with a radar and an X-44 torpedo. Moves on tracks. It has a laser that has five positions for shooting. Very useful when crowds of green creatures are flying from above. It makes no sense to tell you about flying creatures - you will see them yourself soon!
Good arsenal! However, you will not get access to it immediately. On the way to fulfilling your mission - the destruction of AROD 7 - you will find additional modules for your robot. For example, in order for you to be able to release a rope, you need to find and take the appropriate module.
But we understand the genius of Silmarils when we pay attention to the graphic design (and it is impossible not to notice it). The first time I saw Metal Mutant, I stared at the monitor for a long time. I was amazed at what could be created using 256 colors. The graphic design of the game is impeccable. Each game screen can be perceived as a work of art, you can admire it like a painting. You can peer for a long time and find new details that you have not noticed before. Animation is also beyond praise. The designers did a great job: the picture of industrial decadence at the beginning of the game is replaced by a technological utopia, striking in its scale. The contrast of the industrial landfill, given to the will of nature, which heals its wounds, absorbing metal structures in the abyss of the swamp, wrapping them in vines and covering them with leaves, and an industrial paradise, high-tech, flawless, neat.
The sound at the appearance of the inscription Metal Mutant will forever be remembered by me. It is well developed, at the level of everything else.
However, the idea of ​​the Silmarils was not new. In 1985, a game was released where you could transform into three different forms with a unique set of weapons. It was Thexder from Sierra. It is hardly worth comparing them: the difference between these games is 6 years. And, of course, Silmarils had great opportunities - it was able to translate into the game everything that it had in mind. So we got one of the best, if not the best, side-scrolling action in the history of game development. One of those games that the gaming industry will always remember.
‹
›
Home
View web version