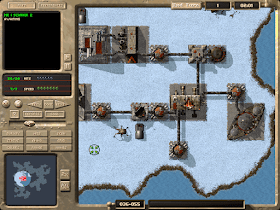 Genre: Strategy
Perspective: Top-down
Pacing: Real-time, Turn-based
Gameplay: Managerial / business simulation
Setting: Sci-fi / futuristic
Published by: Interplay Productions
Developed by: Interplay Productions
Released: 1996
Platform: DOS
The now-defunct Interplay studio seems to be around for a long time to come. This company left behind a more than rich legacy, it is only a pity that it will no longer please us with such good projects. Of course, you did the right thing in thinking about Fallout now, but it's not about him at all.
MAX is a representative of the strategy genre, and the strategies are very unusual, even a little hardcore. Forget everything you've seen before - this game will introduce you to a new take on the genre. The plot in brief is as follows: 8 clans are at war for territories, fighting mainly with the help of robots, hostilities take place on 4 different planets, in general, everything seems to be standard. However, in this game there are so many original finds that the plot simply does not care. 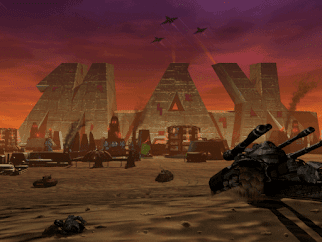 Firstly, depending on the desire of the user, the game can unfold both in a purely turn-based mode and in a partially real-time mode. Partially - because each unit during one turn can only do a strictly assigned number of actions, then you just need to press the "End turn" button and continue to fight. Secondly, in this game there is an opportunity to upgrade all indicators of units (but not more than 100%). Thus, if you sit longer, then you can turn even the most nondescript (at the beginning of the game) combat units into real death machines. Thirdly, it is possible to speed up the construction of buildings by increasing their cost. Want to build a building twice as fast? Please pay twice as much. Fourthly, in this game they invented a unique remedy against the annoying rush - at the beginning of the mission you can buy ANY units (as far as initial finances allow). This way you can buy a couple of tanks even without building a heavy weapons factory. Clans in MAX do not differ too much from each other: basically, each clan has advantages in a certain area, after all, the units and buildings are the same for everyone. The graphics are quite good, considering that the game is written under DOS. All units and buildings are clearly drawn, and the special effects are not annoying. In general, it looks nice.
Of the shortcomings of the game, perhaps, only the difficulty of the game for beginners can be singled out, because at first you just get confused in so many buildings and equipment. However, once you get comfortable with the game, I assure you, you won't be able to put it down. There are very few such interesting and unusual strategies, believe me.
‹
›
Home
View web version