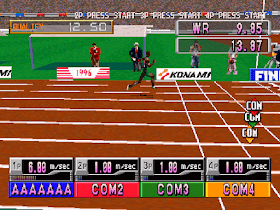 Genre: Sports
Perspective: 3rd-person
Sport: Olympiad / mixed sports
Published by: Konami (America)
Developed by: Konami Computer Entertainment Tokyo Co.
Released: 1996
Platform: PlayStation (PSX, PS1)
Do you think that playing sports is a lot of work? Nothing like this! Very soon, the only thing you will have to practice is pressing two buttons on the controller! Konami, releasing a new version of its legendary game Track & Field, jumps above its head - literally and figuratively! New sports include high jump, long jump, triple jump, hurdles... You can play endlessly. Granted, the simple script and uncomplicated way of playing (know, push your buttons, the sooner the better) may not be the greatest achievement for a system like the PlayStation, but honestly, this is one of the most entertaining video games for several players (up to four).
‹
›
Home
View web version