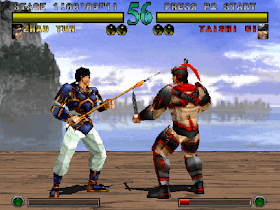 Genre: Action
Perspective: 3rd-person
Gameplay: Arcade, Fighting
Setting: China (Ancient / Imperial), Historical events
Published by: KOEI Corporation
Developed by: Omega Force
Released: 1997
Platform: PlayStation (PSX, PS1)
Opponents of general and complete disarmament say: "Okay, let's destroy all firearms on Earth. But then you must be prepared for the fact that the Chinese will pick up sticks and conquer the whole world." Yes, it is quite possible to believe this statement when you look at the combat duels of ancient Chinese warriors that are played in Dynasty Warriors. The plot of the game is based on real historical events. Fights, as usual, are held for the right to possess supreme power, and only the winner will be able to enjoy it to the fullest. For you and me, this is another fighting game with an excellent three-dimensional image and the ability to test your reaction against the background of various and unusual landscapes.