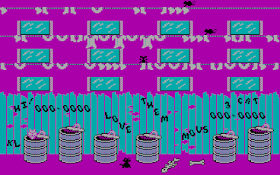 Genre: Action
Perspective: Side view
Visual: Fixed / flip-screen
Gameplay: Arcade, Platform
Published by: IBM
Developed by: Synapse Software Corporation
Released: 1984
Platform: DOS
The life of a yard cat is not easy. Every day is a struggle for survival. Every day, a yard cat has to hide on garbage cans from a ferocious bulldog, dodge various objects that are thrown at him from windows, hang on clotheslines, hoping that a mouse that accidentally runs through does not step on his paws, jump into accidentally opened windows ... Few would endure this hectic pace of life. But the protagonist of this game has set himself two goals and strives to fulfill them with all his might.
First, the yard cat needs to eat. It is not so important what exactly he will have to eat - heels of mice, fish in an aquarium or a canary forgotten in a cage on the table. The main thing is that, replenishing his stomach, he does not fall under a broom or, even worse, collide with a bulldog, which some people prefer to keep in an apartment.
Secondly, the yard cat dreams of meeting a cute little white cat. But he dreams about it only after he eats.
‹
›
Home
View web version