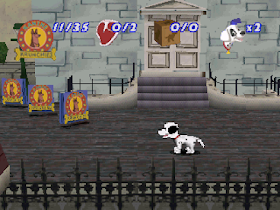 Genre: Action
Visual: Isometric
Gameplay: Platform
Published by: Disney Interactive, Eidos
Developed by: Santa Cruz Games
Released: 2003
Platform: PlayStation (PSX, PS1)
The Spotted Company is back! After the despotic Cruella's attempt to make herself a luxurious Dalmatian fur coat fails, a new plan is brewing in her crazy head. She rubs her hands in anticipation of easy success, but the brave puppies Patch and Thunderbolt stand in her way, it looks like Cruella de Vil is waiting for another disappointment! The plot of the game is as follows: when the owners of Patch moved to a new city. he had the imprudence to get lost, after which he meets Lightning and, with the help of her wise guidance, goes in search of his kidnapped brothers and sisters.