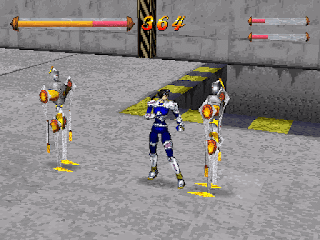 Genre: Action
Perspective: 3rd-person
Gameplay: Beat 'em up / Brawler
Published by: Tao Human Systems
Developed by: Banpresto
Released: 1996
Platform: PlayStation (PSX, PS1)
The origins of this game are hidden back in 1991, when a sitcom of the same name was shown on the screens of Japanese viewers. A little later, the animated film Iria: Zeiram the Animation was released, and then the sequel. Now it's the turn of the video game. You are assigned the role of the bounty hunter Iria, who is long and persistently looking for the creators of a biological weapon called Zeiram, which led to the mass destruction of part of the Galaxy. With chic armor, gadgets, weapons and a faithful companion, a computer named B.O.B. - Iria destroys a lot of very strange enemies, quite in the spirit of the Land of the Rising Sun.
‹
›
Home
View web version