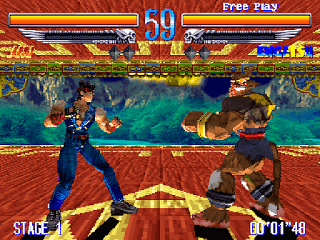 Genre: Action
Perspective: 3rd-person
Gameplay: Arcade, Fighting
Published by: Atlus Co.
Developed by: Racdym
Released: 1996
Platform: PlayStation (PSX, PS1)
A well-made fighting game, 3D graphics, which, oddly enough, is almost not expressed in the angularity of the characters. And if the female fighters are dressed in erotic open outfits, what peeks out from under the clothes really looks like a human body, and not hewn logs. True, this is true only in cases where the characters are not shown close-up. The backgrounds are reminiscent of the times when games were made to please people, not to make them pay more money. It cannot be said that they are breathtakingly beautiful, but they are carefully executed, it is clear that the artist put his soul into it, and did not earn a fee. The same goes for the Character Set: at first glance, this is a standard set of fighters, men and women. Each of the heroes has its own character, which can vary from sublime to diabolical. At the same time, unlike most games, the personality of the character does not remain behind the scenes of the game itself, being expressed only in video inserts and biographies. You can see the reflection of the character of the characters in their behavior, and in creating the images of their heroes, the developers showed a subtle - for a fighting game, of course - a sense of humor. To defeat opponents, you have to use magic with might and main. In order for you to get the simple joy of defeating your opponent, your final blow will be shown in the replay mode. And from three different points. For those who do not have rich experience in games of this genre, there are trainings. The game also provides several modes of competition.
‹
›
Home
View web version