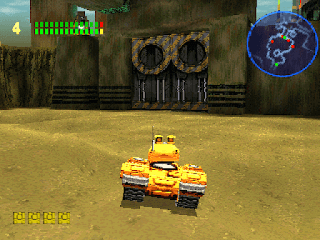 Genre: Action
Perspective: Behind view
Gameplay: Shooter
Vehicular: Tank
Published by: Sony Computer Entertainment America Inc.
Developed by: AndNow LLC, Appaloosa Interactive Corporation
Released: 1999
Platform: PlayStation (PSX, PS1)
A shooting game about a cheerful and incessantly chatting yellow tank that accompanies every action with a caustic commentary. Tiny-Tank will have to confront his iron fellow Mutank (that is, the mutated tank) and stop his no less "cheerful" desire for the destruction of all Humanity. The fun action takes place on twelve vast levels, including: factories for the production of robots, railway stations and deep mines. Tiny can grab the weapons of enemies he has defeated and mount them on his armor. Bristling with numerous machine guns, cannons, stun guns, our hero boldly rushes into battle and never loses his presence of mind. Tiny also has the opportunity to eavesdrop on the radio transmissions of his enemy, where Mutank, never bothering to encrypt the channel, boldly discusses his developments in the field of studying metals and his plans to destroy people, Tiny knows how to turn useful information in his favor.