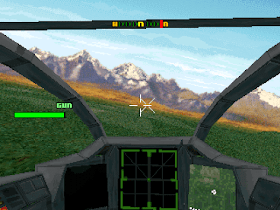 Genre: Action, Simulation
Perspective: 1st-person, 3rd-person
Vehicular: Helicopter, Vehicular combat
Published by: Core Design Ltd.
Developed by: Core Design Ltd.
Released: 1995
Platform: PlayStation (PSX, PS1)
ThunderStrike 2 is the best helicopter simulator since the legendary Warhawk. Having equipped your Special Forces helicopter with rockets, bombs and other types of weapons, you are going to complete eight tasks in different parts of the world: fight pirates in the South China Sea, settle the oil crisis in the Middle East, and others. Serious battles await you. You risk a callus on your thumb by pressing buttons to shoot down air opponents and hit ground targets. The control system is perhaps the only thing that can be claimed against the creators of this game. The helicopter is somewhat reminiscent of a plump ballerina - it moves gracefully, but slowly. You often miss targets, try to turn around to land another hit - and become vulnerable.
The wonderful graphical implementation of the game gives only one subtle glitch during the fighting in the mountains. From your helicopter you can look from different angles. There are many interesting details - for example, how people scatter from a car you hit. In the soundtrack, rock music is interspersed with commands coming from the control center. Explosions are especially well made - both in terms of graphics and sound.