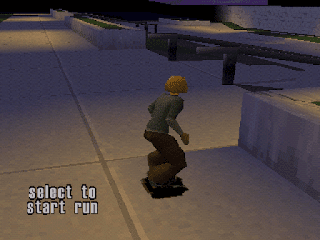 Genre: Sports
Perspective: 3rd-person
Gameplay: Tricks / stunts
Published by: Rockstar Games, Take-Two Interactive Software
Developed by: Z-Axis
Released: 1999
Platform: PlayStation (PSX, PS1)
Apparently, skateboarding fans have received a very nice gift, in 16 different city areas you can demonstrate your skills. New York, San Francisco and several other cities around the world are at your service. Each level starts with free skating, during which you can explore the features of the tracks and choose the best places to perform tricks. When you master a level, a 2-minute race begins, during which you need to score the required number of points and leave the level. But if you do not have time, then the game will not end, but the police will be called and try to confiscate your board. So you have to drape from them as fast as you can and break through to the exit at breakneck speed. During the chase, you can perform various tricks and get a lot of points.
Board and sportswear manufacturers have licensed their products, but other sponsors may appear as the game progresses. Management in the game is quite complex and will require certain skills, but when you get used to it, you will understand how natural and convenient it is for skateboarding. Graphically, the game is executed perfectly, the colors are bright, juicy, the image is clear. In addition to single player, Thrasher supports several multiplayer modes, for example: in one of them you perform a certain trick, after which your opponent repeats it, otherwise a penalty. There are several other original modes, so if you like this sport, then perhaps this game is for you.
‹
›
Home
View web version