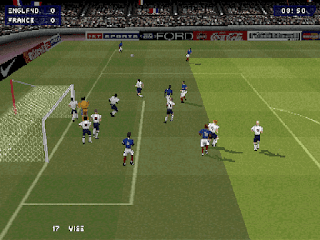 Genre: Sports
Perspective: 3rd-person
Sport: Football (European) / Soccer
Published by: Sony Computer Entertainment Europe Ltd.
Developed by: Team SOHO
Released: 2000
Platform: PlayStation (PSX, PS1)
The sequel to the original 1999 game is another attempt at a realistic football simulator. The game is officially licensed (Fédération Internationale des Associations de Footballeurs Professionnels) so all players in the game have real names and similar looks (as far as it is possible for the console). Dozens of famous football players from all over the world are waiting for you with the game, as well as the main football leagues and championships.