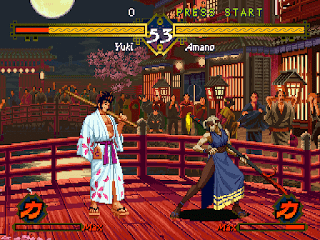 Genre: Action
Perspective: Side view
Visual: 2D scrolling
Art: Anime / manga
Gameplay: Fighting
Interface: Direct control
Setting: Japan (Modern/Futuristic)
Published by: SNK Corporation
Developed by: SNK Corporation
Released: 1999
Platforms: PlayStation (PSX, PS1), Neo-Geo
Two worlds have existed since time immemorial... The world of the living, Ushio, and the Land of the dead, Tokoyo. The fabled boundary separating them forever, the Gates of Hell, has existed since the beginning of the myths to keep the balance of the universe. It was said to be protected by four gods: Seiryu from the east, Byakko from the west, Genbu from the north, and Suzaku from the south. They have always guarded the gates from time immemorial, but over time the legend was forgotten. The action takes place in 1863 during the Bakumatsu, in the last years of the Tokugawa shogunate and at the time of the clash of the two ideologies of Japan and Western society. The Last Blade is one of the best old school 2D fighting games out there. The game features 16 fighters with their own fighting style. The game has responsive controls, great animation and beautiful hand-drawn graphics.
‹
›
Home
View web version