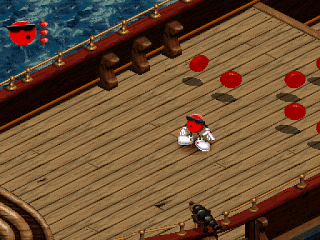 Genre: Action
Perspective: Bird's-eye view
Visual: 2D scrolling, Isometric
Setting: Fantasy
Published by: Virgin Interactive Entertainment
Developed by: Burst
Released: 1996
Platforms: PlayStation (PSX, PS1), SEGA Genesis / Mega Drive
As in the famous video games such as Pink Panther and Gex, here the main character - the little man - Spot's mascot - is drawn into the movie world through the big Hollywood screen. The creators of this game sought to outdo all other platform entertainment, and in many ways they succeeded. Together with the main character, you jump through 20 different stages: collecting marks (Dots) and fighting along the way with a very diverse and colorful crowd of enemies. The settings in which all this takes place are also very picturesque and attractive. You must successfully guide Spot through the worlds of Pirate Movie, Western, Horror Movies and Science Fiction, completing 23 levels (three of them are premium) with 200 different locations. You will have a lot of adventures parodying the plots of famous films "Indiana Jones" and "Jurassic Park". Not only do you have to shoot, but you also have to ride mine carts, drive a spaceship and collect stars to get to the bonus rounds. And perhaps the strongest side of the game is the awe-inspiring musical accompaniment. The graphics and sound effects are also quite well done.
And everything would be fine, but the control system failed! You understand this as soon as you pick up the controller. For example, pressing Right Spot jumps forward. But since you are watching all this from above (isometric view), it is absolutely impossible to calculate the necessary direction of the jump; as a result, Spot jumps by itself! But if you can handle the not-so-friendly controls, you'll have a lot of fun!