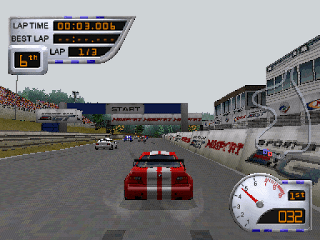 Genre: Racing / driving
Perspective: 1st-person, Behind view
Interface: Direct control
Vehicular: Automobile, Track racing
Published by: Electronic Arts
Developed by: Image Space Inc.
Released: 1999
Platform: PlayStation (PSX, PS1)
Another racing simulator with a very wide selection of great sports cars (more than 50 models): Porsche 911, Callaway C7 and C12, BMW M3, Saleen Mustang, Panoz GTR1, McLaren F1 GTR, Mosler Raptor, Vector M12, Lister Storm, and finally, Mercedes CLK GTR. The game has a simulation mode and an arcade mode designed for beginners to get comfortable with the car, driving technique and tracks. Developers have spent a lot of effort and money to make artificial intelligence (AI) smarter. I must say that they managed to do a lot, so now your opponent is not some "teapot" from a computer, but a very dexterous and quick-witted opponent, constantly learning from his mistakes. A very interesting option is "Full Career", in which, starting from the bottom, moving towards the heights of success. On the way up, you will have to try out a wide variety of cars, there are opportunities for tuning. Graphically, the PlayStation version of the game is noticeably weaker than its counterpart on the PC, driving fails at crucial moments, you need to adapt. There is no drive typical for the games of the Need For Speed series in the game, but rather it shows more realistically how boring sports races are, because to win you need to not only press the gas pedal, but also the brakes in order to slow down in the right place bypassing the dangerous area and make up for lost time on the straight section. So Sports Car GT is a game more for fans of Formula 1 games than for fans of arcade simulators. With everything described above, the game did not live up to the expectations of the players, first of all, not the most outstanding graphics and rather difficult passage modes, but the abundance of cars, tracks and game modes (including race classes) deserves to be familiarized with it.

All tracks and championships

On the press Start screen, press Down, Down, Left, Right, Up, Left, Circle, R2. Hear a sound if everything is OK. Get access to all additional cars in arcade mode and races of all classes in Season mode.

On the Press Start screen, press Up, Right, Left, Right, Down, Up, L1, R2. Hear the sound, then everything is OK. You will be able to select some additional cars in the arcade and even more - in the Season Mode.

On the Press Start screen, press Up, Left, Left, Right, Down, Right, L1, Square. Hear the sound - everything is OK. Get $1.5 Million in Season mode.
‹
›
Home
View web version