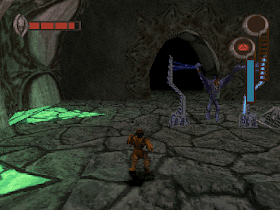 Genre: Action
Perspective: Behind view
Gameplay: Shooter
Published by: Electronic Arts
Developed by: DreamWorks Interactive L.L.C.
Released: 1998
Platform: PlayStation (PSX, PS1)
A game based on the movie of the same name. There are two opposing armies here. On the one hand, Commando Elite, armed soldiers, experienced and dangerous in combat. On the other side are the Gorgonites, the mortal enemies of the Elite. At first, they were all toys that had a computer chip inserted into them to perform certain movements, stand in poses and say military commands. But a misfortune happened - a computer company accidentally mixed up the chips, and a top secret chip with artificial intelligence was inserted into the toys. Thus, a group of "little soldiers" with a very powerful military intelligence arrives in a small town in Ohio.
Small Soldiers is a real full-length action game. Players take on complex tactical battles in the very strange reality of the Gordon Dimension, home of the Gorgonites. Players control Archer, the spiritual leader of the Gorgonites, who leads them into battle against the Commando Elite. The game features a split-screen two-player mode where you can fight as Aprepa or Chip Hazard, the leader of the soulless commandos. There are pros and cons to playing on either side. Commandos are better technically trained and more powerful. And the Gorgonites, while seemingly primitive, possess sophisticated informal abilities as well as magical powers. And very good defensively. Players can perform direct attacks, set up ambushes and traps, form squads and storm enemy positions - all in a full-volume space!
‹
›
Home
View web version