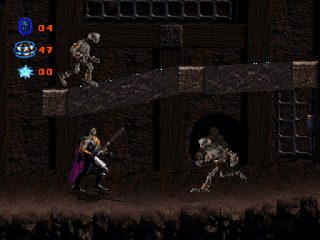 Genre: Action
Perspective: 3rd-person, Side view
Gameplay: Platform
Setting: Fantasy
Published by: Playmates Interactive Entertainment
Developed by: Neversoft Entertainment
Released: 1996
Platform: PlayStation (PSX, PS1)
In this game based on the animated television series, you have to swing your saber as Prince Light Star. Made this game unusually artistic, although the game action is pretty standard. The game space slowly unfolds in both directions; outside the screen, you will encounter various Bosses. Sometimes, however, you have to linger at the edge of the screen and wait until you can move on. Of course, for a system like the PlayStation, one could expect something more, but even in this form, the adventures of the Prince are very good entertainment.

Level 1 (Crystal Mines) has a hidden extra life that you can find on the second platform. Here's how to get to it.
‹
›
Home
View web version