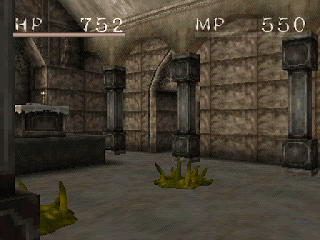 Genre: Action, Role-Playing (RPG)
Perspective: 1st-person
Setting: Fantasy
Narrative: Horror
Published by: Agetec
Developed by: FromSoftware
Released: 1999
Platform: PlayStation (PSX, PS1)
Shadow Tower is a first-person RPG from the creators of the King's Field series. In the game, you are assigned the role of a mercenary Ruus Hardy who arrives in the city of Zeptar and finds it devastated, and the inhabitants killed by evil creatures, in addition, the souls of the inhabitants of the city are imprisoned in the Tower of Shadows. Hardy will have to find an ancient sword and find the key to freeing the souls of the slain, and for this he will have to fight the demons and monsters of the underworld in seven huge worlds using all available weapons and spells. The game has 150 enemies and over 265 weapon, armor and spell options. Despite the obvious similarities, the game Shadow Tower is not a continuation of previous creations from From Software, but a new series of games (in particular, Shadow Tower: Abyss was published for the PlayStation 2). The game is made in the RPG sub-genre: Dungeon Crawler, which means that the dungeons are waiting for you, while you do not have a map and you will have to navigate solely by the compass. Like the King's Field - Shadow Tower series of games, it proceeds in a leisurely manner and at first your mercenary is very clumsy and vulnerable, but as your skill grows, you will become stronger, more experienced and faster. The worlds of the game are divided between the worlds of Earth, Fire, Illusion, Death, etc. There is also a multiplayer in the game, it is made in the fighting game genre, where two games can fight monsters that are open as the game progresses.
‹
›
Home
View web version