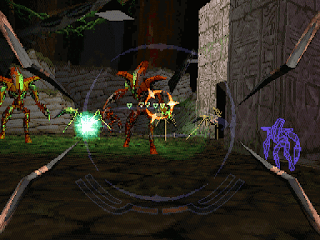 Genre: Action
Perspective: 1st-person
Gameplay: Shooter
Setting: Sci-fi / futuristic
Published by: Psygnosis Limited
Developed by: HammerHead Ltd.
Released: 1998
Platform: PlayStation (PSX, PS1)
Get ready for a fight not for life, but for death! Controlling an all-terrain vehicle of the latest type, armed with powerful laser guns and "smart" missiles, you must crush the powerful empire of the Shadow Master - a bunch of darkness and evil, where they produce ungodly killer robots in the form of animals. Shadow Master is a 3D 1st-person action game with such amazing graphics that it's amazing how it's possible on the PlayStation. Playing a kind of mix between Tunnel B1 and Blam! machinehead. You have to complete 16 missions in seven worlds. Destroy enemies and get power crystals, which are very useful. The crystals are placed in the tank, and with their help you can "repair" your health, repair the engine or armored shields. On your display is the control cabin, where there is everything you need for shooting, piloting and combat strategy: crosshairs, armor protection status, ammunition availability, as well as a radar and a data bank (from which you will find out who your enemy is). The speed of 30 frames per second, especially when 6-8 enemies attacked you, is a great test of your coordination of eye-finger reflexes.
If you know Machine Head and Tunnel B1, you can imagine Shadow Master as this shooter contains elements of both games. There are fast paced action, powerful explosions and characters created by fantasy artist Rodney Matthews. The game has a strange, otherworldly look with a predominance of purple. However, an energetic combat story, and especially numerous puzzles and riddles, noticeably decorate the game. Built-in audio signals make it easier to navigate, although sometimes they get bored with their monotony (like the calls of a hawk, for example). Management is not bad, although in the first couple there may be difficulties. Because of this, your car may get stuck somewhere in a corner or fall into a crack. A little patience and training, you will get comfortable and get real pleasure. Especially since the game looks just fine graphically - a real leap forward compared to Machine Head.

Aliens and monsters in this game are very strange and varied. In different missions you will meet tiny "Skuttlers" and huge "Triceratops". Let's introduce you to some of these creatures:
‹
›
Home
View web version