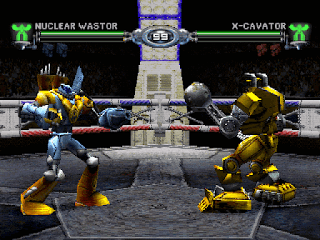 Genre: Action
Perspective: 3rd-person, Side view
Gameplay: Fighting
Vehicular: Mecha / giant robot
Published by: Mattel Interactive
Developed by: Paradox Development
Released: 2000
Platform: PlayStation (PSX, PS1)
Here we need a little digression into history. Rock'em Sock'em Robots is a game that appeared in 1964 and is a small ring with two robots in it. The round continued until one of the robots' head flew off. Over the years, many variations of this game have been produced. In 2000, Mattel released a new smaller version of the game, and released the game on the Playstation in support. The game was made on the nth iteration of the Thrill Kill engine.
In the distant future, or maybe not very distant, robots fight for the title of the strongest in the ring.
For each battle won, you get money that can be spent on new parts that will help promote your fighter in the championship leagues.
‹
›
Home
View web version