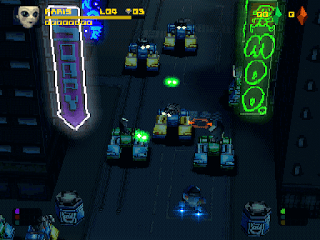 Genre: Action
Perspective: Top-down
Gameplay: Arcade, Shooter
Published by: Psygnosis Limited
Developed by: Psygnosis Limited
Released: 1999
Platform: PlayStation (PSX, PS1)
Retro Force takes us back to the days of classic 2D shooters, but the action is played out in a full 3D world. You have to go through 15 levels in four different worlds, heavily inflicted by small enemies armed to the teeth. Choose from four pilots: Paris Tetsuo, Hawtin Raydar, Pi (almost a meter tall blue cat) or the Sinclaiz robot. Then the hero will join the elite Retro Force team to fight the enemy aggressors who intend to destroy your planet. Spaceships change depending on the chosen character, but they all have powerful armor and six stationary weapons. Three powerful blasters in front and three types of bombs provide excellent combat power. Overcoming each zone, you find numerous power-ups, allowing you to build up firepower many times over. Such "toys" as homing missiles and plasma balls, not to mention extra lives - that's what makes the game simply irresistible. But even more amazing weapons are in the hands of intermediate and main bosses. The ultimate goal of the game is to destroy the diabolical mega-maniac Kyati.
Graphically, the game is made in the style of sci-fi movies of the 70s. Polygonal landscapes and landscapes, as well as numerous color effects, create a very attractive picture. The game has four main modes: single, team, two players, arcade mode for four players, and a mode for 2-4 players. The ability to conduct a variety of battles and skirmishes, of course, put forward this shooting game among the favorites, although the game has control and gameplay problems in general.
‹
›
Home
View web version