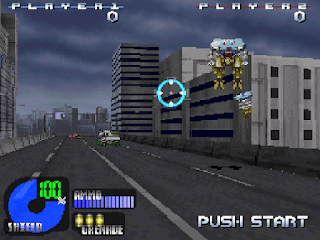 Genre: Action
Perspective: 1st-person
Art: Anime / manga
Gameplay: Rail shooter
Vehicular: Mecha / giant robot
Setting: Sci-fi / futuristic
Published by: Sony Computer Entertainment of America
Developed by: AlfaSystem Co.
Released: 1996
Platform: PlayStation (PSX, PS1)
While Virtua Cop's ground-breaking sci-fi action game has already been enjoyed by Sega Saturn users, nothing like it has yet been released for the PlayStation. And so the Japanese developers decided to stun and do good to everyone. The plot of the game is based on the fact that you are patrolling the streets of the city in the guise of Hiro Utsumi or Nash Stolar. These are two policemen, masters of all trades, especially willing to shoot, especially since the city is surrounded by hordes of angry robots - aliens. An order has been received to disable their automation, so you need to fire your way through several stages of some kind of metal hell and get to the leader of these creatures. Sounds attractive? But this is only at first glance…
In fact, one of the few draws to this game are the cartoonish inserts created by the manga artist Masamune Shirow (who is famous for several classic cartoons). However, for the game Project: Horned Owl, even he apparently did not try very hard; The characters' figures look great, but they're far from brilliantly animated. Some excitement comes when the Boss Robot comes into play, armed with a heavy mini-gun. Robots are also impressive - dogs jumping right in your face. On the whole, as experts note, the game is unlikely to captivate any sophisticated lover of action games, even at high levels. First, it is too simple; game action contains the possibility of numerous stops, so there is no need to lose your precious lives. Secondly, the plot is very straightforward and leaves no room for the player's imagination.

1. It would be nice for you to know what the blinking gauges at the bottom of the screen mean. There are three of them:
A. "The strength of the defense". When enemies deal damage to you, your defense decreases. This continues until the indicator becomes 00, after which you die with nightmarish screams.
B. “Power of arms”. By holding the trigger, you can increase the energy of the shot and the power of the volley to sweep a dozen iron villains out of the way.
C. "Grenade sensor". He counts the number of shells at your disposal - grenades of a rather impressive type (there can be a maximum of three of them). Try to shoot one of these toys - there will be a blue flash and a very weak explosive.
2. Carefully use a powerful charge, it does a lot of damage, but wastes your ammo.
3. When the screen is filled with enemies, first take care of the yellow running robots, they use rockets and machine guns.
‹
›
Home
View web version