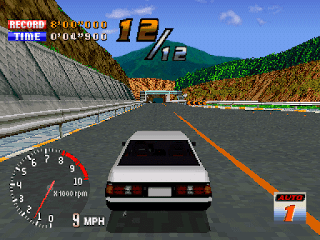 Genre: Racing / driving
Perspective: 1st-person, 3rd-person
Gameplay: Arcade
Published by: Atlus U.S.A.
Developed by: CAVE Co.
Released: 1997
Platform: PlayStation (PSX, PS1)
Advan Racing is a racing game from Japanese developers made in collaboration with the organizers of the real-life extreme racing competition ADVAN, held annually in Japan. The game features 16 real race cars, including classes of roadsters and rally cars. When creating the game (particularly in terms of visual effects), Atlus borrowed some good ideas from its older and very popular fellow game Gran Turismo. Most of the racers (all of them from Japan) are available at the beginning of the game, in addition, each of them has a historical background, though in Japanese. The projection of the races is standard for most representatives on the PlayStation, there is also a view from the cockpit. There are more than enough racing modes in Advan Racing from Quick Mode to Official ADVAN GP. The game was sponsored by the well-known Japanese company Yokohama Tires, so its products are found everywhere in the game, you will find this out when you tune your car, since there are a lot of opportunities for this, there would be money. The graphics of the game are very impressive, it's really a beautiful game, with very friendly controls, regardless of the type of controllers used, the visual effects, glare on the surface of the car, overflows are especially impressive, it seems that the developers even went a little too far in this part, at times the car looks more like a Christmas tree, rather than a car for an extreme race.
‹
›
Home
View web version