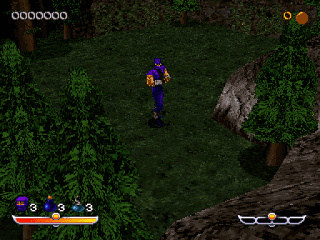 Genre: Action
Perspective: 3rd-person
Gameplay: Beat 'em up / brawler
Narrative: Martial arts
Published by: Eidos
Developed by: Core Design Ltd.
Released: 1998
Platform: PlayStation (PSX, PS1)
The game combines the most piquant elements of three classic arcade games: Double Dragon (attack up to 6 opponents at once), Rygar (magic), and Ghost & Goblins (knife throwing and environment collapse). The result was some kind of bloody flicker. You will begin your odyssey in the guise of Kurosawa - you will try to save your homeland from a motley gathering of demons and obsessed natives in the forest, where half a dozen peasants survived, who for some reason are not too happy about your appearance. The plot of the game is simple: clear the area of the enemy force with the help of fists and everything you find in ancient chests scattered everywhere, and move to the next level. Take care of weapons - they are in short supply, if you lose, you will not find a new one soon. The more cunning player will soon find out that most targets can be hit from a distance with a knife, but don't rejoice - in more difficult levels, the knife will not even leave a scratch on the polished armor of the villain. The game successfully balances the ability to hit the enemy from a distance and in hand-to-hand combat, we should not forget the magical "hellish machine" that can clear a large area at once, and smoke bombs to mislead the enemy. If it suddenly seems to you that Kurosawa is about to collapse from wounds and exhaustion, look into the magic scrolls - they will allow you not only to return your heroic strength, but also to improve your magical powers.
It must be admitted that the graphics in Ninja: Shadow Of Darkness are not bad and slow down only at the maximum screen loads. Solid and speed - 30 frames per second. The perspective “from above and behind” most successfully reveals the situation. Sometimes your fighter disappears behind some kind of obstacle, but a dynamic camera helps out, allowing you to find him in a matter of seconds. 13 levels are created according to the principle “from simple to complex”. You have to visit forests and castles, martial arts schools and dungeons, and traps will meet everywhere along the way. The main enemies (in the middle and at the end of each level) are well drawn, but not too dangerous, especially since your magic will allow you to drain energy from them. In short, Ninja has everything that makes an arcade an arcade: special effects, superb controls, and hordes of potential victims.

Kurasawa has the ability to use magical energy. This energy is replenished when you collect sacred scrolls, which are hidden in many levels. It's best to cast magic on large groups of enemies rather than single enemies. Useful to store magic for strong end level bosses.
Shurikens
In the European version of the game, shurikens were replaced with small daggers. When you throw them at enemies, they don't come very close to you; it's not that effective on large groups of enemies, but it's a significant help nonetheless. These items can be replenished when you use Holy Scrolls.

Sometimes during the game you have to resort to hand-to-hand combat. Kurosawa wields many different strikes, but the best tactic is to press back on the attack button as much as possible. Stronger weapons such as a sword or other deadly blades are given to you as you progress through the game. Every weapon can be refilled, including your fists, when you use sacred scrolls.

Hand-to-hand combat is the most commonly used form of combat for Kurosawa. He owns several combinations of techniques. Punching is carried out by pressing the square button again. On the third press, he delivers a powerful uppercut, which, as a rule, lays down almost any enemy. In addition, for greater effect, he can use his legs. Similar to punching, pressing the round button again triggers a combination of kicks that culminates in a powerful kick to the head. In addition, he can perform a light kick that knocks Kurosawa back while attacking. It can be useful when you're trying to put some distance between you and an enemy while still attacking them. For more variety, you can of course use combinations of the two types. Try to mix attacks with jumps to make it harder for the enemy to reach you. When you are well equipped, it can be very effective.
‹
›
Home
View web version