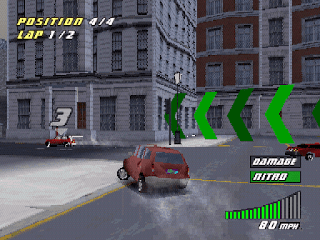 Genre: Racing / driving
Perspective: 1st-person, Behind view
Gameplay: Arcade
Vehicular: Automobile, Street racing, Vehicle simulator
Published by: Davilex Games B.V.
Developed by: Davilex Games B.V.
Released: 2002
Platform: PlayStation (PSX, PS1)
The London Racer II is another version of Davilex's prolific Racer series. Racing takes place primarily on the streets of London and Edinburgh, with additional tracks in Las Vegas, New York and Chicago.
Three single player modes are available: Single Race, Tournament and Time Trial. In a single race, the player can choose any of the 6 available characters, any track and any unlocked car. In tournament mode, the player races through a series of tracks, collecting cash prizes and unlocking new cars. In both modes, players compete against other races while avoiding being caught by the police. In Time Trial mode, players race against the clock, trying to beat the best time for each track.
Each car (driven by a different character) has different acceleration, top speed, handling, braking, and power characteristics. Cars can also be upgraded using money earned from winning races and collecting cash tokens during races. Vehicles also take damage on impact and can be completely lost if the damage gauge is full. Repair tokens can be collected during races, and if a car ends up damaged in a race, it can be repaired before the next one for money. You can also collect and buy nitro tokens, as well as change the colors of cars.
There are also two split-screen game modes: Duel and Cop vs. driver. In duel mode, players compete against each other on any track. In Cop vs. Driver one player is a cop and the other is a normal racer and the cop player has to try to crash the driver within the allotted time.
‹
›
Home
View web version